Here’s the edited text of my speech to the B2B Marketing Annual Conference held at Cavendish Square in London on 7 November 2013… To be clear, today I’m representing my views – not those of the firm that I work for. And it’s one of at least eight different views […]

Another thing to worry about: should social media be on your “to do” list?

This article was produced for the Autumn 2013 launch issue of the magazine .so. For more detail, visit http://www.tcg.so/ Whether your in-tray is physical, virtual, metaphorical, or even a mix of the three, the one thing you can be sure of is that nowadays you have quite a lot in […]

Not up where you belong…

The B2B Marketing team have asked me to speak at the next Leaders’ Forum on 19 September on the subject of why marketing has become so disconnected from the boardroom and what we can do about it. Perhaps recognising that I’m not such a big name draw as my fellow […]

Look at the state we’re in…

There are some great marketing networks out there right now which are really looking out for the future of our profession. A few weeks ago I went along to what will hopefully be the first of many “meet a mentor” gatherings run by the Chartered Institute of Marketing where seasoned […]

The tablet is here. Deal with it…

By Dave Stevens Google+ Venture capitalist Mary Meeker recently presented a paper at Stanford comparing the first ten quarters of shipments of each of Apple‘s “I” devices – iPod, iPhone, and iPad. The paper showed that iPad shipments in the product’s first 30 months outrate the iPhone threefold. By January […]

The Social Media Crash is coming…

By Dave Stevens Google+ I see that B2B Marketing magazine has published its latest IT Marketing Benchmarketing Report (go to http://www.b2bmarketing.net/it-benchmarking-2013 for details). And I’m delighted to report that this survey of 200 technology marketing practitioners (and one day we should get behind exactly what a marketing practitioner is. I’m […]

Why is listening more important than talking in social media?

By Dave Stevens Google+ I attended PRmoment.com’s “Social media in B2B Communications:  The power of integration” conference on Wednesday and presented a paper on why listening is more important than talking in social media.  This is a summary of what I presented… There are some honourable exceptions, but the state […]

Shut the door as you leave the nursery please… 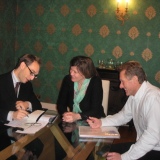 By Dave Stevens Google+ And so it’s back to business!  Whether it’s the arrival of Labor Day, the end of the school holidays, or simply the change of the weather, you can’t help but have picked up the signals that the final business term of 2012 is upon us. For marketers, […]

Why B2B Marketing should get more emotional…

By Dave Stevens Google+ Last weekend, I headed up to Edinburgh to spend a couple of days enjoying the Fringe Festival.  If you’ve not been, it’s well-worth a visit.  There’s a real sense of carnival to proceedings.  There are hundreds of shows that you can dip into covering comedy, drama, […]

Five lessons for marketing from London 2012

Dave Stevens – Olympic volunteer!     By Dave Stevens Google+ In the last week, I’ve taken time off from my regular marketing job to play a part as one of the many volunteers helping to make London 2012 the big success that it is. I’ve not been stationed anywhere glamorous like […]